What is Speculative Screenplay or Spec Screenplay? 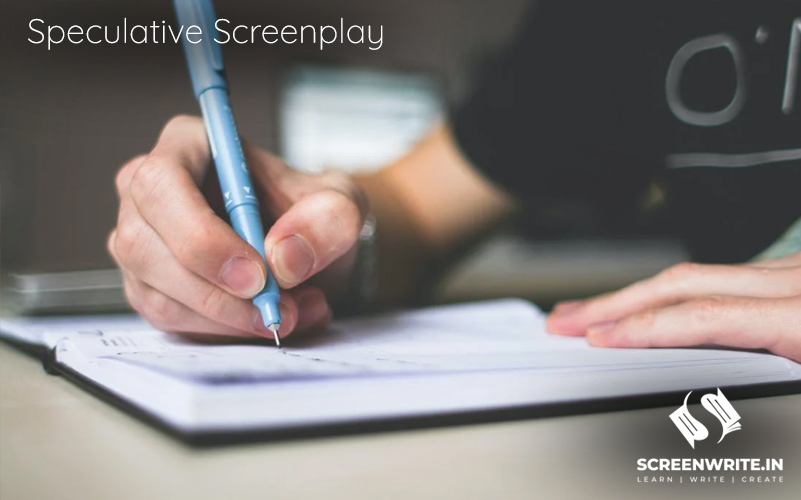 ‘Specs’ are generally written by aspiring screenwriters to establish their talent as a writer; or a card to direct the movie themselves. So, the intention is to impress the reader – a producer or a representative or sometimes a prospective director or an actor. And the objective is also for easy reading of the structure and content, not giving too much possible distractions as to the technical aspects of the picture-making process viz. camera angles, edit suggestions or any other technical advice.

How do we write a Spec?

My first feature film Chanakyan is about a hurt and crippled violine player coming back to seek revenge on the powerful politician who spoiled his family and his love.

The idea first came in as a documentary topic about mimicry artists to start with, and slowly developed to a revenge story with a mimicry artist.

Another example, I wrote a film named Guna about an obsessional-psychoneurotic and his struggles to define love in his own schizophrenic world. This idea came about of a similar character (but not exactly the same) I remembered during my childhood, and who was eventfully part of my entire neighborhood.

Ideas can emerge from anywhere, anytime. Most of the times I realize idea come to you even without you knowing about it and prompted by your subconscious mind — a vast archive of your life experience. Sometimes for you, movie ideas come from watching other movies or tv shows or reading short stories or novels.

Exploration: You should explore more after you have come up with an idea for your Spec. Exploration can be diligent research or availing own experience — you may call method writing.

Probably, you can also find and watch other films and screenplays similar to your current idea, so you won’t stepover them much as you develop the idea. Also, please keep in mind that you spend too much time on exploration, or it may turn out overwhelming for you to proceed effectively with your basic idea.

Developing the Story and Structure: Developing the story and the character is a complementary exercise and with the knowledge of the process of crafting stories, you should be able to cover this part of your spec. I sincerely insist a bit of learning of the classic models of story and structure can really help you here.

We all have a notion that any attempt to learn about stories and structure is unnecessary or it will tarnish the originality of your telling the story. But another way to look at is to break the principle after you know the principles.

There are innumerable books, masterclasses and other videos that provide these principles, and availing them is no harm but can only add to your strength as writer to make choices.

Documents of Structure: It’s better to make use of step-outlines and beat-sheets to organize the plot (the arrangement of events) in your narrative. Step-outlines are overview of your structure in condensed form to make better assessment of your structure and written in numbered paragraphs, where the action and dialogue of events are summarized to a few pages. Beat-sheets are the detailed form, detailing each event (scene) of the entire narrative.

Once confirmed with the beat-sheet you can proceed to write the first draft of the spec.

Dialogue and Format: Screenplays are format-writing, and you may need to get a grip of the format and learn them. Of course, there are various writing software available now, both paid and free, but I recommend you learn the generic aspects of format for your better understanding of the same.

Also, there are a few points to consider about writing dialogue as you write them. Though the characters in your story speak their ways as the you see them deliver the dialogue, there are certain specific nuances that will help you get the right dialogue as you progress.

First Draft: When you write your first draft spec, the necessity is to finish the draft with the plot (scenes), the actions and the dialogue all in place. Your plans may shift here and there, the theme may also change as you finish the draft, but doesn’t matter, completion is perfection at this stage.

Revisions and Rewrites: This is the most important part of your writing as you meticulously analyze, correct and revise your screenplay with the right embellishments and polish.  As the quote goes ‘every writing is rewriting’, you should be eager to revise and rewrite your first draft through many drafts to make it radiate the emotional shine you really envisioned. And then it gets finally over when you’re satisfied.

No comments to show.